During the Late Bronze Age, light chariots were constructed more substantially, acquiring sides made of animal hide or even additional scale armour.

Maryannu Archers and crew were dressed similarly, whether they be part of the armies of Mitanni, Middle Kingdom Assyria, Kassite Babylonia, Syrian and Canaanite city-states or the Elamites.

This chariot is the earliest of the Late Bronze Age and has wheels with 4 spokes, bow cases on the sides of the chariot, and un-armoured horses. Pack contains 1 Chariot, 2 un-armoured Horses, 1 Driver, 1 Archer and 1 alternative Commander. 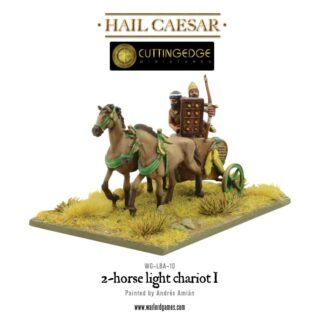