The swine feather was essentially a musket rest, useful for propping a heavy musket, but with a vicious looking iron spike on the end that could be used to form a hedgehog of spear points if placed in the ground, whereby the musketeers  could, in theory, retreat behind and fire at their foe in safety. They remind one of the English Longbowmen using archers stakes in the Hundred Years war on the battlefields of Crecy, Poitiers, etc. Often swine feathers were carried only with the purpose of being carried as a stake , with no provision for being used as a musket rest. They were liberally issued in many armies on the continent, the Swedish army, of course, were versed in their use. The Scots Covenanter armies were certainly equipped thus, though we have little evidence of their success or otherwise, even General Monke, the Parliament general suggested their use quite late in the period.

You can use our Swine Feathers to give your models that individual look and also give the models a more Thirty Years war feel. They can be used as alternative musket rests, or driven into the ground at an angle next to a musketeer to show the hedge of stakes being formed by the unit. Just how common or how effective the stakes were is hard to fathom, but it makes your troops look a  sight more confident when faced by galloping enemy cavalry! 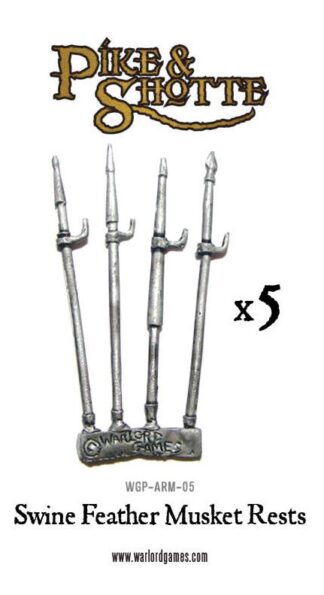