These 9-11cm Young Chestnut Trees are part of 4Grounds Trees & Scenic Material range, it is suitable for 28mm, 15mm and 10mm games.

The chestnut group is a genus (Castanea) of eight or nine species of deciduous trees and shrubs in the beech family Fagaceae, native to temperate regions of the Northern Hemisphere. The name also refers to the edible nuts they produce.

The Chinese and more so the Japanese chestnuts are both often multileadered and wide-spreading, whereas European and especially American species tend to grow very erect when planted among others, with little tapering of their columnar trunks, which are firmly set and massive. When standing on their own, they spread on the sides and develop broad, rounded, dense crowns at maturity. The two latter’s foliage has striking yellow autumn colouring. 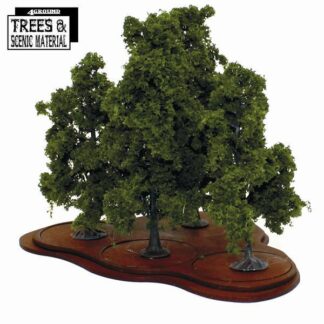