Originally known as the Altdorf Acolytes, the team later became known as the Reikland Reavers. With their displays of great skill and accuracy on the pitch the team flourished under the coaching of DD Griswell Snr. Now though, years later and under the care of DD’s great-grandson JJ Griswell Jr. can the Human team keep living up to the high standards?

With attire looking somewhere between full combat and American football, the Human team in Blood Bowl is known for being an all-rounder of a team. This kit comes with a full 12 man team and additional themed extras show below. 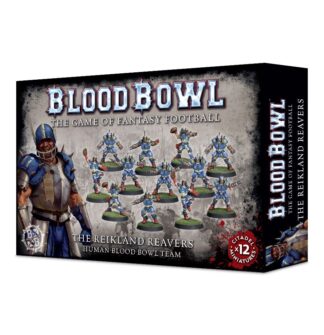