Blood Red Skies Air Strike is a full rules compendium for the game whilst introducing new mechanics such as ground attack. Ground targets are scarcely undefended, and any pilot will quite often have to weather the storm of flak and bullets which pepper the skies in desperate efforts to defend structures, convoys and airfields amongst others.

Ideal for any Blood Red Skies ground attack scenario in which the Luftwaffe are the defenders, our anti-aircraft battery markers are designed in a smaller scale (1:300) to Blood Red Skies aircraft (which are 1:200), which lend themselves to the forced perspective of the aerial to ground tabletop combat that Air Strike allows for. 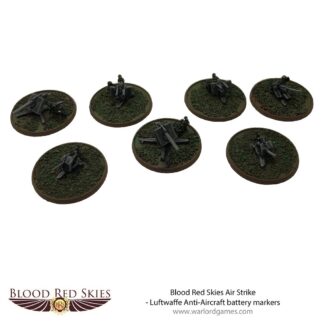