These knitted bonnets were the trademark piece of headgear for the Scottish soldiers throughout the 17th Century and beyond. Cheap to make , but waterproof and warm the blue bonnets were used by all covenanters or government armies in our period.

Some were also issued to Royalist Northern troops, eg Newcastle’s troops, though wearing the same hats as your enemies cannot always be a good thing.

They were almost always blue and sometimes as here, have a bunch of coloured ribbons on its side.

This pack contains 1 sprue with 4 bonnets. 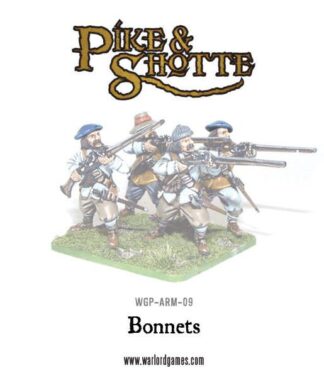