The cruiser or cavalry tank served as the main driving force for the British cavalry, serving on the front lines alongside the main stead of the British forces.

The first of the cruisers was produced by Vickers-Armstrong in the economic downturn of the mid 1930s, and consequently included a number of cost-saving features.

The cruiser Mk IV was essentially an up-armoured version of a Mk III in much the same way as a Mk II was a better armoured Mk I.

This additional ‘spaced’ turret armour is what gives this tank its distinctive silhouette and makes it easy to distinguish from early models. It was the first of the cruisers to be produced in quantity and formed the basis of several armoured divisions in France and North Africa. 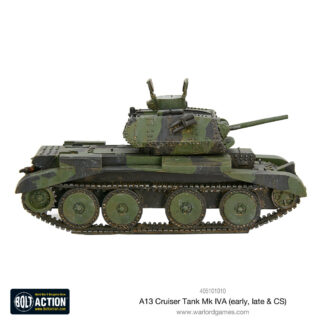