The Second World War gave birth to many new ways of waging war and the airborne forces are a good example. To help the airborne soldier deploy once arriving at his target by glider or parachute jeeps were dropped with them and sometimes bicycles. Weirdest of all perhaps was the wondeful Welbike, a miniature motorcycle that could be assembled in seconds and the paratrooper be on his way to take destruction to the Hun…

It was manufactured in Welwyn in Hertfordshire, hence the name. About 4,000 were built and were used in various operations, though the sight of burly paras atop miniature motor cycles must have been an amusing sight for any foe…

It was not a great success, it was underpowered and slow, but many were sold to the public after the war and are fondly ridden today by re-enactors and those who collect old machines.

To a sweaty tired Para however with a long way to plod, they would have been a godsend…..

British and Polish Paras seem to have used them and quite possibly the Canadians too. 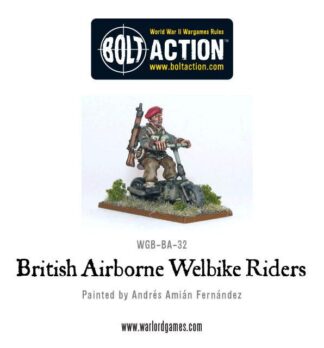