The Commandos – drawn from volunteers from within the United Kingdoms armed forces, the Special Service Brigade would swell to 30 individual units and 4 assault brigades – carrying out operations in all theaters, from Norway Channel Islands Mediterranean France Germany to Burma and later inspiring formation of elite spearhead units such the US Rangers.

One such Royal Marine unit was detailed to carry out an amphibious assault, taking the fight to the Germans in the port of Bordeaux – 5 nights of paddling through horrendous conditions saw 2 of the original 6 Mk2 Cockle’ Canoes making through to place their limpet mines and make a daring escape!

In this set you get: 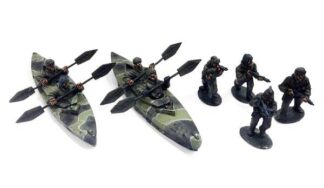