The Harbinger, the Herald, Prophet… lots of names for the same being. This strange figure appeared in places around the world simultaneously, but only in one was he murdered. The assassin’s blade tore open the Harbinger’s chest, a gouge that tore open the heavens and reality.

In the years since, reports have cited a strange figure walking the streets of Venice. Looking at it is like looking through a hundred sheets of shattered glass as reality bends and breaks around the being. Seeming to now survive on multiple planes of existence at the same time, the Harbinger’s Reflection is known to briefly aid some with supernatural knowledge before shattering into a thousand pieces in front of their eyes.

At one point the most powerful being in the world, the Harbinger was foolish enough to let their guard down and usher in an age of destruction. Or maybe they knew all along? Those are questions for another time. Probably a book, rather than a product description!

The Harbinger’s Reflection is what is left behind, and while they’re not all-powerful﻿ they’re still a fantastic character to add to your gang! Able to shuffle around your Agendas is a super handy power in itself, but the Harbinger’s Reflection can also use any number of Will Points to boost a single roll and replenishes Will Points when other characters use theirs! All this together provides a character who is surprisingly effective, and one that your opponents won’t underestimate twice!

Contains 1 resin miniature and 1 plastic base. Cobblestone base pictured not included. 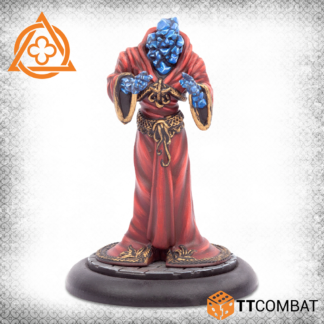