Known as KFKs, these vessels were mostly wooden fishing boats intended for use by the Kriegsmarine as patrol boats and sub chasers. Their design dates back to 1920. A huge building programme was launched in 1942, making them the largest German warship design. About 612 were completed in 42 different shipyards across seven countries (certain country’s shipyards were unaware they were constructing war vessels). Out of 554 commissioned, more than 130 were lost.

The German Navy was not the only one that operated such vessels. The Royal Navy for instance saw an opportunity for shipyards to develop naval versions of fishing trawlers that could easily be repurposed and sold to commercial fishers come peacetime. With a little bit of research (and your opponent’s agreement!) there’s nothing stopping you using these vessels in any Cruel Seas fleet.

You can find the full rules for the Kriegsfischkutter in the Close Quarters supplement for Cruel Seas. The design of the miniatures lend themselves to navies other than the Kriegsmarine as well, particularly the new Yugoslavian Partisan fleet found in the supplement. You might even use them as alternative merchant vessels for a scenario. 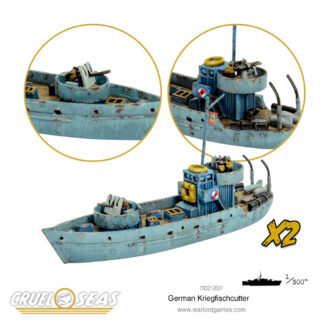