The Thegns (pronounced Thanes) were nobles of Saxon England who held land in return for military service. In times of war they served their Lords as the military elite of the Saxon armies. Highly trained and motivated it was the prowess of the Thegns that enabled legendary Kings such as Alfred The Great to drive back the pagan Viking invaders and Athelstan to become the first King of all England.

The box contains parts for 44 spear armed Thegns although there are some extra sword and hand-axe arms too. The set also includes extra parts to convert up to two of your warriors into Saxon Lords and up to two into horn blowers. The set also includes two dracos and the instructions include 2 full-colour paper banners to attach to spear-armed warriors. Included in the box is a sprue of plastic bases to mount all 44 of your figures. 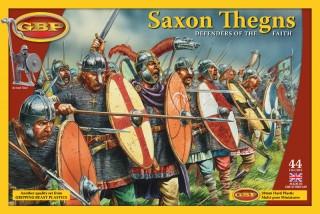