Pulled by 4 equids, the early Platform Carts were a two-wheeled variant of the four-wheeled Battle-Wagon. They were similar in construction with a high front and low sidings. Unfortunately, pictorial evidence for these types of carts is scanty and there is no consistency as to their appearance. Some show a seat at the back, but it is difficult to envisage how this would be practical with the crewman’s view blocked by the high front of the cart. The seat, therefore, is not present in this model.

With only two wheels, these carts would have been more manoeuvrable and faster than the heavier Battle-Wagons. With only enough room for one crewman, it is perhaps likely they were not used in the same capacity as the Battle-Wagons, and hence used as Command or Scout vehicles. 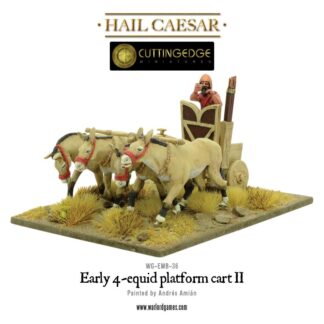