Although by the end of the French and Indian War there were a substantial number of British regular battalions in America, at its outbreak the relatively small number of regular battalions necessitated the reliance on provincial regiments and militia. The organisation of these provincial battalions were formed in line with British regulations, with the inclusion of drummers within units. The major exception is that not all battalions seemed to have formed a distinct grenadier company.

This blister contains an officer, 2 standard bearers and a musician, to supplement your French Indian War Colonial Provincial regiments. 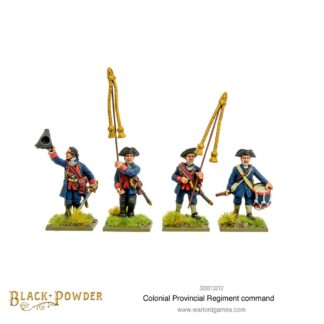