At the turn of 1754, a large-scale military operation was deemed necessary in North America, which meant sending British regulars to intervene. Two Highland regiments were raised for this purpose: the 77th – Montgomerie’s, and the 78th – Fraser’s.

Although it was suggested that in the climate of a North American Winter the Highlanders be clad in more appropriate, warmer garments, the men and officers of the 78th protested so much that they were permitted to retain their traditional dress.

Serving in North America initially, the 78th joined the Quebec expedition of 1759 and served with distinction despite the particularly dire winter of 59-60. Both the 77th and 78th marched on Montreal along with the 42nd Royal Highland Regiment – the first time in which all the Highland Regiments serving in North America during the Seven Years’ War fought together. Though the 77th and 78th regiments were disbanded at the conclusion of the campaign, land grants were given to those who wished to stay, many officers and men remained in Canada to help rebuild.

The predominant feature of Highland dress was the kilt- a belted plaid in this case. The standard British infantry red coat was not sufficient to accommodate the plaid, so Highlanders adopted a short red jacket cut square across the back just below the waist.

Grenadier companies of some early Highland regiments wore a mitre-shaped fur grenadier cap, with the grenadiers of the 77th wearing bearskin covers over these. 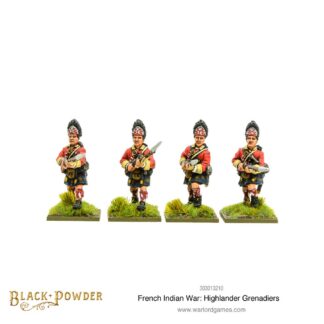