The Jagdpanzer IV, Sd.Kfz. 162, was a tank destroyer based on the Panzer IV chassis built in three main variants. Minor modifications and improvements were made throughout the production runs of all variants, as well as several field improvements, the most common being the addition of armor sideskirts.

The Jagdpanzer IV served in the anti-tank sections of Panzer and SS Panzer divisions. They fought in Normandy, the Battle of the Bulge and on the Eastern Front. They were very successful tank destroyers but performed badly when used out of role as substitutes for tanks or assault guns, as most tank destroyers were. 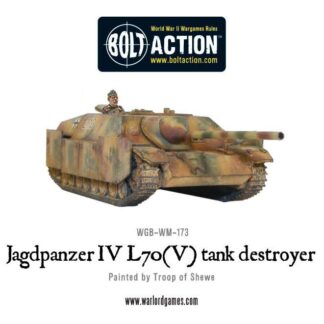