The Königstiger  (officially named the Panzerkampfwagen Tiger Ausf. B), known as the ‘King Tiger’ or ‘Royal Tiger’ by the Allies, was a development of the famous Tiger I tank. It’s introduction to hostilities in 1944 caused significant problems for the Allies in countering this potent threat but ultimately it saw action too late to have a game-changing impact on the war. However, it was feared and respected by the Allies whose tanks could be easily destroyed by the high velocity 88mm gun mounted on its turret.

Two turret designs were used in production. Both were designed and made by Krupp and, after Henchel were awarded the contract, the prototype Porsche parts were given to other projects. As the first Henchel chassis rolled off the production line the only available turret was the one destined originally for the rejected Porsche project. This turret was adapted to fit the Henchel Tiger II body and had a rounded front and steeply sloped sides, with a curved bulge on the turret’s left side to accommodate the commander’s cupola. Fifty Porsche turrets were mounted to Henschel’s hull and used in action until the Henchel turret variant production came online to replace it. 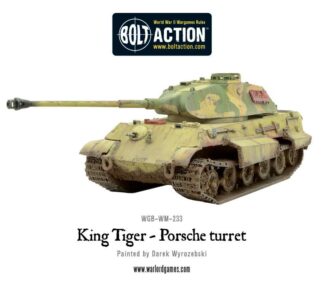