The Panzerjager I (German “Tank Hunter 1”) was the first of the German tank destroyers to see service in the Second World War. It mounted a Czech koda 4.7 cm (1.9 in) cm PaK (t) anti-tank gun on a converted Panzer I Ausf. B chassis.

It was intended to counter heavy French tanks like the Char B1 that were beyond the capabilities of the 3.7 cm PaK 36 anti-tank gun then in service and served to extend the usable lifetime of otherwise obsolete Panzer I tanks. They were employed in the Battle of France, in the North Africa Campaign and on the Eastern Front. 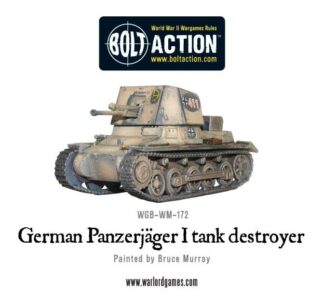 You're viewing: German Panzerjager I tank destroyer £18.05
Add to basket