Born of a desperation for more mobile anti-tank weapons as the Allied armies closed in on Germany, Hitler ordered that the 234/3 be upgraded to carry the far superior Pak40 anti-tank gun.

As a stand-in weapon it was still deployed with reconnaissance units and proved quite effective.

The SdKfz 234 series were eight-wheeled armoured cars used for armed reconnaissance ahead of a formations line of advance. There were 4 official versions and possibly some ‘unofficial’ field conversions. 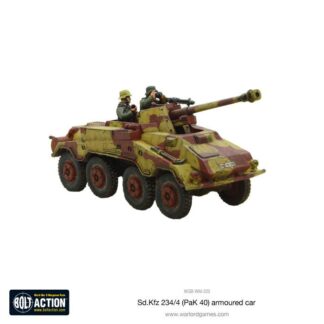