Speed and power have always been the watchwords of the Shaltari tribes. The Gharial embraces both ideals in one command package, taking the fight to the enemy, dealing maximum damage and then relocating to sow more destruction elsewhere.

Based on a Caiman hull, the Gharial is a more aggressive fighter than its longer-ranged cousin, and is designed as the ultimate in close support. Its tactical role makes the Gharial the preferred mount for the most aggressive of Shaltari Warchiefs, individuals that live for nothing but war and distain risk more than any others of their usually prudent kind.

The Gharial’s fearsome Heavy Microwave Cannon is able to slice through tanks with contemptuous ease and is also powerful enough to liquefy all organic matter in enclosed spaces even through several layers of concrete and steel. If that is not enough to stop the enemy, this command skimmer is also equipped with close range Neutron Launchers that fire one-shot heavy density projectiles into the core of structures, often levelling them in one volley.

Rules for this unit can be found in Reconquest: Phase 2 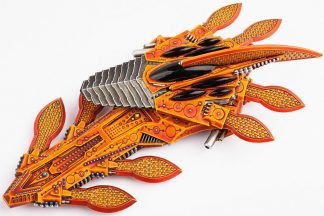