Gotrek and Felix battle the forces of Chaos, the sinister Serpent Queen Khalida, and many more enemies across two novels, three novellas, and a selection of short stories.

READ IT BECAUSE
Discover Josh Reynolds’ take on the Old World’s most infamous wandering heroes across a pair of action-packed (and riotously funny) novels, supported by additional stories from a wide range of authors.

DESCRIPTION
Gotrek and Felix: unsung heroes of the Empire, or nothing more than common thieves and murderers? The truth perhaps lies somewhere in between, and depends entirely on whom you ask…

Racing towards the besieged dwarf hold of Karak Kadrin, Gotrek and Felix battle to thwart the brutal leader of a Grand Chaos army, Warlord Garmr. Upon arriving, the infamous duo is charged by Ungrim Ironfist with a suicidal task: to prevent the creation of a portal to the Realm of Chaos itself. On another quest, far away in the vast deserts of Nehekhara, Gotrek and Felix are captured by the undead Queen Khalida and forced to fight her enemies across the sun-baked Land of the Dead. But, as the unlikely pair are swiftly reminded, the dead do not stay buried for long…

CONTENTS
Road of Skulls, The Serpent Queen, Charnel Congress, Marriage of Moment, and Berthold’s Beard by Josh Reynolds
The Reckoning and The Contest by Jordan Ellinger
Into the Valley of Death by Frank Cavallo
Curse of the Everliving by David Guymer 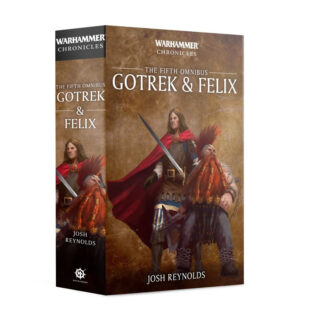