Can you land your first elements as close as Staff Sergeant James Harley Wallwork did on that fateful day?

Upgrade to this amazing collector’s edition, Ham and Jam set! Recreate this historical battle with all the elements in play!

Look at all those extras! And here is a complete list of everything in this massive box set:

The British troops are elite and highly trained members of the 2nd Battalion of the Oxfordshire and Buckinghamshire Light Infantry led by Major Reginald John Howard. They would ‘Hold Until Relieved’ by Lord Lovat, his personal piper Bill Millin, and his Commandoes.

German troops are from the 716th Infantry Division. This was a static coastal defence unit with poor equipment. It included pressed men from Eastern Front POWs, and young inexperienced Germans. reinforced throughout the day. 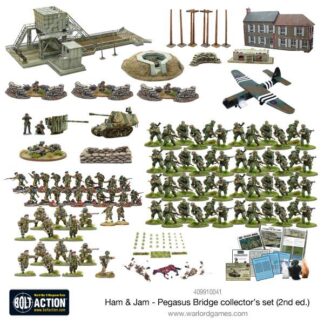