Notify me when in stock

The Duke of Cumberland, was a younger son and favourite of the brave George II of England. He grew up to command large British forces on the Continent after initially trying out for the Royal Navy. He fought bravely and well in the endless battles of the mid-18th century, being wounded at the Allied victory at Dettingen.

His troops fought superbly at Fontenoy against superior numbers of French, but his lack of tactical flair led to the battle going against him, hard fought though it was.

He was a popular General however, and was chosen to put down the Rebellious Scots under their so called King Charlie. He marched north to give battle at Culloden where his well trained and well led Redcoats smashed the rebel army. After the battle his men pursued the fleeing Scots with great ferocity and effect (something that of course the Scots would have done if they had the chance). He then went on to crush further resistance and earned his name “butcher” by applying harsh and brutal treatment to those he thought still guilty of rebellion.

He went on to command on the Continent but did not perform well, his father effectively disowning him.

Warlord have caught his character well for he was a burly fellow indeed.

Please register to get your referral link.

When your referrals make a purchase we give you a % of that order! Get started now, by sharing your referral link with your friends. 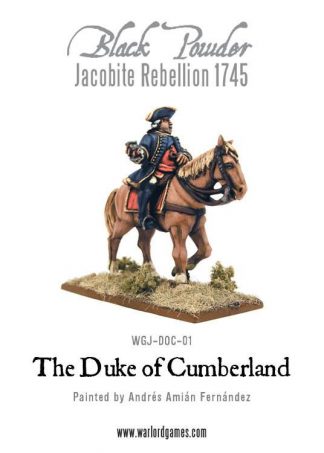 You're viewing: Jacobite Rebellion: Duke of Cumberland 1745 £4.50
Add to basket