Mega-City One is at the mercy of a terrible act of retribution, thirty years in the making. The Chaos Bug has been released and the weakened Justice Department is finding it increasingly difficult to remain in control. As Judge Dredd searches for the perpetrators of this heinous act, another fearsome faction is added to the fray…Fear, Fire and Mortis – the Dark Judges! This stunning conclusion to the latest Mega-epic is written by John Wagner (Button Man, Strontium Dog) and featuring the art of Henry Flint (Zombo), Colin McNeil (Insurrection), Leigh Gallagher (Defoe) and Ben Willsher (Lenny Zero), ensures that nothing in Dredd’s world will ever be the same again! 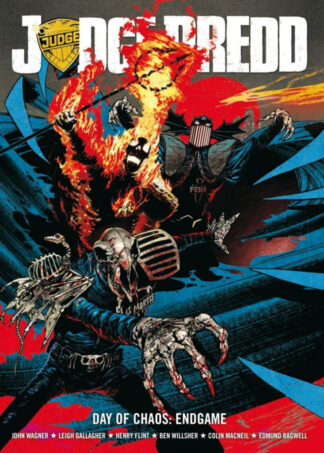