Arriving on the battlefield at the same time for the PVA as the KPA, the BTR-40 is a new means of transportation for the Chinese. Still better trained to be a light infantry force the BTR-40 was used as a prime mover. However, the capability to use it as a troop transport in limited fashion is obvious. Lacking the numbers to create an armoured spearhead with tanks caused the PVA to use these in limited roles. The air superiority of the UN forced the PVA to hide these valuable pieces of equipment. The BTR-40 had a crew of two and could carry eight soldiers. 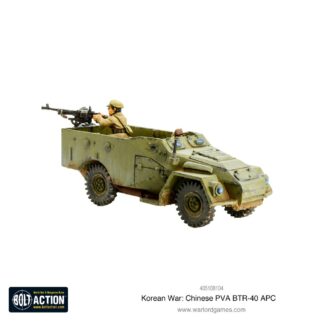