The Chinese used flamethrowers in relatively large numbers during the early battles of the Second Sino-Japanese War. The success of the weapon system demonstrated the effectiveness in pushing defenders out of a fortified position. Flamethrowers were sourced from Germany and later from the Western Allies, the Soviet Union, and captured from the Japanese. Flamethrower teams may be used in an infantry squad or an Engineer squad as an attachment.

The 2.36” American Bazooka was easily copied and widely used during and after WWII. The older and original version was very effective against the tanks and fortifications of the Chinese Civil War but near useless against heavier US tanks. The Bazooka could still take out or damage the M24 Chaffee and the various M4 Shermans.

The PVA had a variety of light mortars ranging from the Soviet 50mm mortar to the captured Japanese Type 10 and Type 89 knee mortars. Later in the war the Chinese made a very effective copy of the US 60mm mortar. Each Rifle Company had three 60mm mortars to form a single platoon battery. 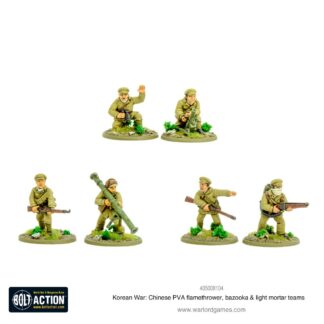