The multiple rocket launcher mounted onto a truck is one of the most distinctively Soviet weapons of the Great Patriotic War, so of course, the USSR passed this weapon on to its KPA comrades. A Katyusha barrage delivered a devastating and highly demoralizing amount of firepower very quickly in a saturation bombardment. It was, however, inaccurate and reloading times were longer than for conventional guns. As a result, Katyushas generally supplemented, instead of replacing, normal guns, often being employed to open an attack. There were several different types of launcher mounting various numbers of rockets – anywhere from 14 to 48. Those carrying the most rockets required considerably longer to reload. All Katyushas were used for long-range bombardment and most were truck-mounted. Their mobility enabled them to disperse quickly after firing to escape the effects of enemy counter-battery fire. 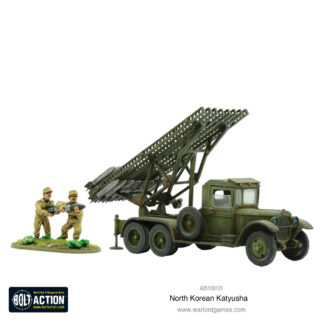