General John Churchill, 1st Duke of Marlborough, 1st Prince of Mindelheim, 1st Count of Nellenburg, Prince of the Holy Roman Empire (26 May 1650 – 16 June 1722), was an English soldier and statesman. He achieved highly in extraordinary military and political careers, but his victory at Blenheim assured his legacy as one of the greatest military Generals of all time.

As part of the War of Spanish Succession, on 13 August 1704, Marlborough’s army, assisted by Prince Eugene of Savoy, inflicted a crushing defeat on the Bavarian army on the banks of the Danube at Blenheim, ensuring Vienna’s safety from the Franco-Bavarian army and preserving the existence of the Grand Alliance – drastically altering the fortune of the whole war.

Marlborough’s Blenheim campaign marked one of the pre-eminent examples of marching and fighting prior to the Napoleonic era, and its success removed Bavaria from its war effort entirely.

Our miniature is based on the painting by Robert Alexander Hillingford, and depicts Marlborough mounted following the victory at Blenheim, signing the despatch –

“I have no time to say more but to beg you will give my duty to the Queen, and let her know her army has had a glorious victory.” 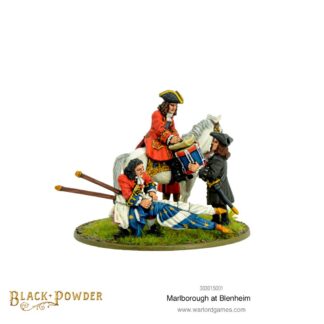 You're viewing: Marlborough at Blenheim £14.25
Add to basket