The earliest 2 horse-drawn chariots seem to have been developed by the Hurrians, Kassites and other Anatolian Highlanders in the latter half of the Middle Bronze Age. Their use soon spread to the various Amorite Kingdoms, the Elamites and the Hyksos.

The dress and equipment of these early chariot warriors would likely have been similar in all of the various nations. This consisted of long robes, tunics or kilts with some light armour. The end of the Middle Bronze Age also saw the introduction of scale armour for some charioteers and which became commonplace for chariot warriors by the Late Bronze Age. All of the crew figures in this range are interchangeable, so that there is a possible 18 combinations of the 2 man crews.

The chariot body at this time was made from a light wooden frame created by bending it into shape through the use of steam. In the Late Bronze Age, skin covers were added, and sometimes bow cases and quivers were added to the sides of the chariot cab. The axle was now at the rear of the chariot cab, not the centre, as was the case with earlier platform cars. This overall design allowed for a faster and more maneuverable vehicle.

The Horses do not have reins, so the option is there to add these using cotton thread or thin wire through a drilled hole at the corner of the horses’ mouth and then attached to the Driver’s hand(s). The Driver is slightly open handed so that either the reins can be inserted or a small piece of wire added to act as a whip. There are 4 poses of horses of which 2 poses will be chosen at random to be included with each chariot. The horses may differ slightly in pose from those shown in the photograph.

The Chariot rail needs to be carefully bent into shape and then fixed into the three holes in the chariot cab floor. It is recommended that the rail is glued into the holes with super glue and, to strengthen the bond, PVA glue added to the joins when dry. 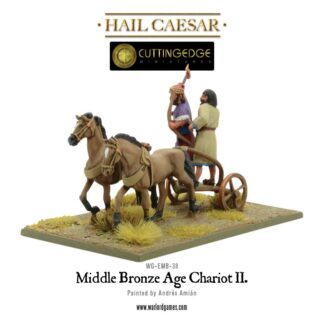