Ulgoth is a highly defensive monster that can be added to any Destroyers force. His Unwieldy ability makes power attack throws targeting him more difficult for enemy monsters, and any time an attack does succeed against him, one of the boils on his back bursts, releasing a Lords of Cthul unit into this reality.

That isn’t the only way that this monster has of flooding the city with minions, however – anytime he lays a tentacle on an enemy unit, the energy released by the target’s demise opens a tiny portal that allows a Lord of Cthul unit to squirm through. Ulgoth is such a disturbance on the fabric of reality that others find his mere presence to be a disruption to their plans. 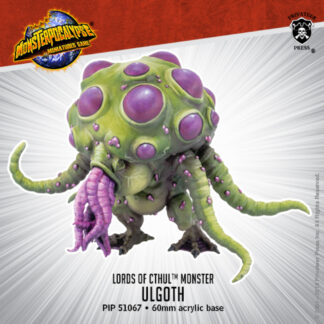 You're viewing: Monsterpocalypse Lords of Cthul Ulgoth £31.46
Add to basket