The Ottoman Empire was a serious threat to Christian Europe throughout the 16th and 17th centuries. The expansionist policies of Suleiman the Magnificent in the 1500’s had seen a huge Empire carved from Eastern Europe, North Africa and east into Asia. The driving forces behind this army were the expanding Janissary Corps of infantry and the feared Sipahi cavalry. These ‘household troops’ were backed up by a wide array of feudal troops from across the Empire. 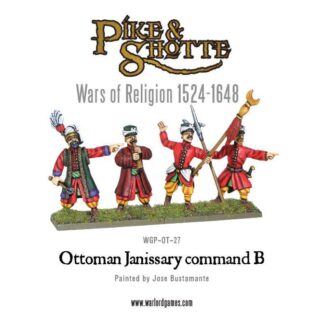 You're viewing: Ottoman Janissary Command B £5.70
Add to basket