One of the most enigmatic armoured fighting vehicles of the Second World War… The subject has the fairly innocuous designation VK100.01 Porsche Type 205 yet to any serious student of WW2 AFVs this subject is better known as the Panzerkampfwagen VIII Maus (Mouse).

This example of late war German imagination may be named after a tiny rodent but it is anything but mouse like. Weighing an astonishing 188 metric tons the Maus still holds the record as the heaviest fully enclosed armoured fighting vehicle ever built. Unlike the majority of the so-called ‘paper panzers’, advanced German tank designs which only existed in technical schematics and project documentation, the Maus was actually built with two prototypes almost complete and perhaps as many as 9 others under construction when Hitler cancelled the programme in late 1943. 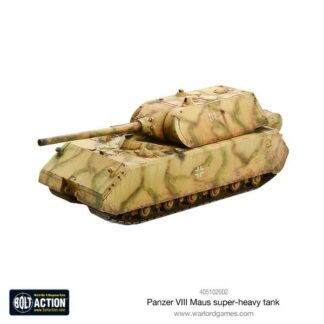