The Twelfth Primarch has been found! United with the War Hounds – now renamed the World Eaters – the gladiator Angron gives his sons an ultimatum that will change their very nature, and their destiny.

READ IT BECAUSE
You’ve seen the immediate aftermath of Angron’s recruitment into the Imperium in the short story ‘After Desh’ea’ – now Ian St. Martin brings us the details of what happened next, and the World Eaters’ adoption of the Butcher’s Nails.

THE STORY
As the Emperor travels the galaxy at the head of his Great Crusade, few events are as important as rediscovering his scattered sons, the Primarchs, and bestowing them as the masters of their Legions. United, a Legion becomes a reflection of its Primarch, both in his strengths and his flaws. For the Twelfth Legion, once the War Hounds and now the World Eaters, the line between strength and flaw is almost impossible to separate. Placed in command of a Legion he does not want, in service to a father he cannot forgive, Angron gives an ultimatum to his children, one that will set them down a path that they can never return from. So desperate for his acknowledgement, will the World Eaters follow their father and cast themselves in his broken image or will they resist? And will any of them ever learn who their father was truly meant to be? 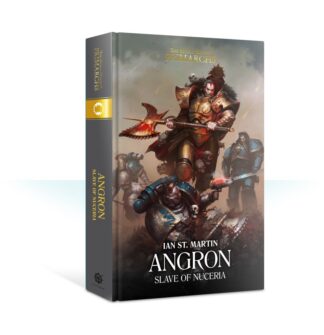