RuneQuest: Roleplaying in Glorantha is an all-new edition of one of the world’s most influential and acclaimed fantasy roleplaying games. First appearing almost 40 years ago, RuneQuest is as dynamic and vital as ever. This all-new, deluxe edition introduces RuneQuest and its setting of Glorantha to new players everywhere.

Try out a skill-based percentile system that balances experience-based progression with deadly combat!

The core rules of RuneQuest are essential for players and gamemasters, as they contain all the rules for character creation, starting homelands, background history, professions, skills, starting Runes and magic, and the cults and gods whose influence will define your character’s activities. Further, the rules for character advancement are contained here, for the times between adventures.

Players will want this book to create their unique characters, diving into sorcery, picking their cult, or taking up shamanism to converse with mysterious spirits.

Gamemasters need this book, as it contains the core rules for the game, including task resolution, combat, and damage, as well as guidelines for special situations in combat, such as formations and chariots.

The Roleplaying in Glorantha Core Rulebook is a hardback edition. 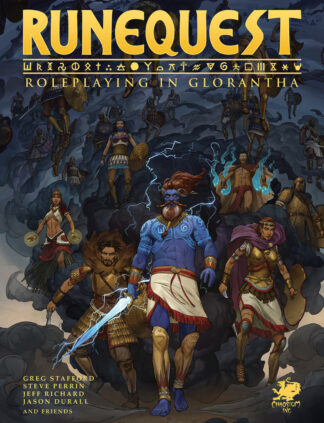