In the strange worlds of the Mortal Realms, Gotrek Gurnisson craves one thing above all: purpose. When he discovers a being who might lead him to it, he will stop at nothing to find them – but old enemies seek the same prize…

LISTEN TO IT BECAUSE
Gotrek’s adventures in the Mortal Realms continue, written once again by David Guymer, with an all-star cast – headed by Brian Blessed! Say it with us: GOTREK’S ALIVE!

THE STORY
Gotrek Gurnisson was once the greatest Slayer of the Old World, meeting his doom in the great cataclysms of the End Times. The heroic duardin stepped forth into the Realm of Chaos to fight the daemons gnawing at the world’s ending and satisfy his death oath, leaving behind his companion Felix Jaeger. Now, he finds himself in a strange new realm where gods walk the earth and dark forces are ascendant.

Within the endless forests of Ghyran, Gotrek learns of a being with the power to guide him to what he craves above all else: a destiny, and a purpose worthy of his legend. What he seeks is a prize more terrible than any he could have imagined, fought over since the dawn of time by powers beyond even his indomitable strength. Nor is he the only scion of the Old World to be drawn by its promise, and Gotrek will have to overcome the greatest nemesis of his past if he is to claim his future. 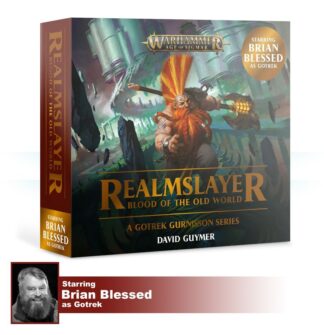 You're viewing: Runeslayer: Blood of the Old World (audiobook) £28.00
Add to basket