The Firedrake is a large and lethal gunship which carries the exotic Spatial Disruption Cannon as its primary armament, providing powerful air-ground fire support. This eldritch weapon becomes increasingly dangerous as the Firedrake closes distance with its victims.

The Spatial Disruption Cannon projects an region of unstable dimensionality ahead of the muzzle, inducing a range of unpredictable (but invariably deadly) contortion and warping effects on anything caught in the maelstrom. Its effects are utterly unique, frequently horrific and occasionally darkly comic to observe. Bizarrely twisted vehicle hulls, stretched objects and shredded corpses are always to be found in the Firedrake’s wake. Indeed, the effect of such a weapon on organic matter is best left up to the imagination! With a finite power output in relation to range, the closer the Firedrake is to its target, the wider the area of effect can be. The Firedrake also carries a tail mounted twin, long-barrelled Microwave (Dragon) Cannon for additional anti-infantry firepower. Hastily issued UCM command directives have been distributed to frontline units advising the early destruction of these aerial terrors.

The Firedrake also features an auxiliary Gate system, equivalent to the Eden Medium Gate in power output. This allows the Firedrake to bring in its own ground support when needed and makes it a true multi-role unit. However, since this system is auxiliary and has massive power requirements, it is impossible for the Firedrake to fire its weapons while the Gate system is in use.

Full background and rules are now available in Reconquest: Phase 1

One model per blister 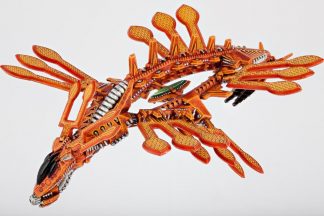