Here comes the efreeti bright like the Sun, the unconquered villain in her way to ascension to godhood! Yesterday all troubles of characters might have seemed far away, but in this Adventure Path from Paizo Inc. Dawn of Flame everything they know about all known Suns will change, because there will be sun-diving, fight on sundown and a great chance for death in the atomic flames of the sunburst. Yesterday there was a peaceful and quiet universe. Today the GM will drive the team of heroes through a real path of the fire. That’s the reason why we have made our first fiery dice for Starfinder RPG. We dreamed in Q WORKSHOP about the dice set, made of the best material, that looks like it has been “cut out” of blazing plasma with yellow paint glowing like the corona of a star in elaborated engravings. On the highest face, you find engraved a  twelve-point double star, a symbol of pillaging sun that shines above the station in Burning Archipelago, where this campaign mostly takes place. The backgrounds of all digits resemble starship hatches and gates on a space vessel. These dice are durable and we hope that this set will rescue your character from all dangers that lurk in the blinding blaze of the sun.

Let’s start a fire as big as a whole star, with plasma bursts and corona explosions.  All should be dangerously close to the sun.  There should be a team of heroes that risk burning themselves to crisps too. And remember: something burned six times is usually turned into ashes! What else can you fry during the whole campaign?

Soldiers of Brass – a gang of alien thieves in the middle of a space bazaar;

Sun Divers – your whole team of heroes, if they get to brave…

The Blind City – will you try to burn the secret city built of real plasma?

Assault on the Crucible – the Grand Finale needs burning of a witch or a whole team of hags. 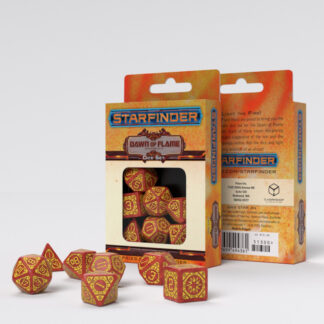