Strontium Dog: The Life and Death of Johnny Alpha – Dogs Of War

Paperback Book 2 of 2 in the series.

Mutant versus norm in a battle of survival!

EARTH, THE LATE 22ND CENTURY. MANY SURVIVORS OF THE DEVASTATING ATOMIC WARS WERE MUTATED BY STRONTIUM 90 FALLOUT. These ‘mutants’ became a victimised underclass – hated by the ruling ‘norms’ and forced into squalid ghettos, the only job left for them was bounty-hunting.

Renowned Search/Destroy agent Johnny Alpha died defending mutant-kind from the tyranny of the human race. Now he’s back, as ruthless as ever and fully prepared to conquer his enemy at all costs!

This gut-punching slice of sci-fi action is brought to you by original Strontium Dog creators John Wagner (A History of Violence) and Carlos Ezquerra (Judge Dredd). 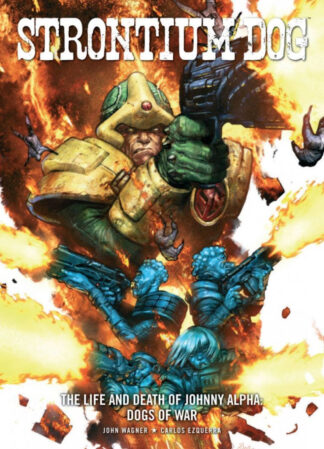 You're viewing: Strontium Dog: The Life and Death of Johnny Alpha – Dogs Of War £14.24
Add to basket