Gotham City is no stranger to fear. Behind closed doors, in shadowy alleys, across night-shrouded rooftops, and in ancient caverns and sewers, monstrous creatures and psychopathic villains lurk.

Dr. Kirk Langstrom, a zoologist who specialized in the study of chiropterology, developed an extract intended to give humans a bat’s sonar sense and tested the formula on himself. The extract worked, but it had a horrible side effect: it transformed him into a hideous man-bat hybrid. The serum also took away his intelligence, so he went on a mad rampage until Batman found a way to reverse the effects. Later, Langstrom takes the concoction again, and Man-Bat returns. He also coaxes his wife, Francine Langstrom, into drinking the serum, and she goes through the same transformation, becoming She-Bat. Together, they terrorize Gotham City until Batman could once again restore them.

As the Guardian of Gotham, Batman strikes fear into the hearts of his enemies—utilizing terror itself as a weapon in his crusade against the villains that plague his city. However, there is another denizen of Gotham that knows how to use fear to his advantage. One that turns Batman’s own weapon against him and revels in terror and dread: the Scarecrow.

The undead monster known as Solomon Grundy is powerful, immortal and bad news for every hero unfortunate enough to cross his path. Grundy was a corrupt man named Cyrus Gold until his untimely death in Slaughter Swamp. Since then, his entire existence has been an unending cycle of death and rebirth. When Grundy dies, he eventually rises again, emerging from the depths of his original resting place in the swamp to wreak havoc on the living. 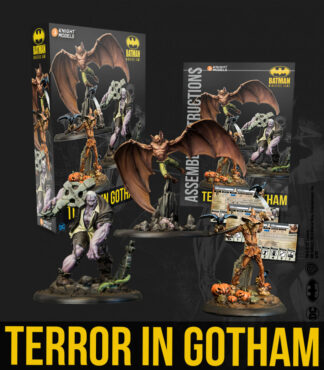