As the infernals came for human souls, refugees fled to all corners of Caen (and beyond) to escape. Many of these refugees found themselves in troll lands. There, some were welcomed allies while others were not. No matter their allegiance to the trollkin, many of these survivors brought with them their stores of supplies, including weapons and ammo, which Brigadier General Gunnbjorn happily accepted in return for sanctuary among the trollkin.

It was not long before the brigadier general organized the first units of barrage teams, trollkin trained to use cutting-edge rocket launchers acquired from the human kingdoms. With plenty of ammunition available, the barrage teams are allowed to fire into enemy lines repeatedly, scorching the battlefield with their devastating blasts.

Trollkin Barrage Teams are a potent, long-range unit that can deliver high-powered explosive shots deep into enemy lines. With a base range on their rocket launchers of 16˝, there is not much that can hide from their shots once they’re in position. They are a straightforward unit but very good at what they do, and what they do is blow things up. They pair well with models that increase their ranged output, whether that’s the distance of their shots with models such as Captain Gunnbjorn (PIP 71045) or Hunters Grim (PIP 71070), or models that increase the damage potential of their attacks, such as Brigadier General Gunnbjorn (PIP 71122) or General “Thunderstone” Brug (PIP 63030). 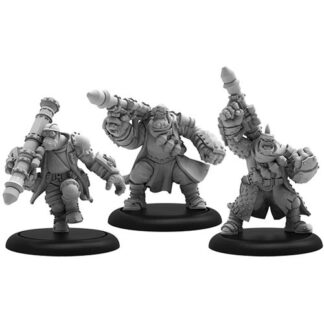