A compulsive read – packed with information and history of the US Marine Rifleman (1939-45) featuring superb photographic references and detailed artwork.

The Marine Corps began World War II with less than 66,000 officers and men. Yet despite suffering 10 per cent of the overall American casualties, the Marines were able to build on their proud traditions and history to transform a small branch of service into a premier combined arms amphibious assault force. Regardless of its expansion by 750 percent, the Corps was able to maintain its sense of tradition, instill that into thousands of new Marines, and create an elite arm of service. In this book, Gordon Rottman, follows a Marine Corps rifleman through his draft, training and participation in assaults such as: Roi-Namur in the Marshall Islands, Saipan and Tinian in the Mariana Islands, and Iwo Jima. 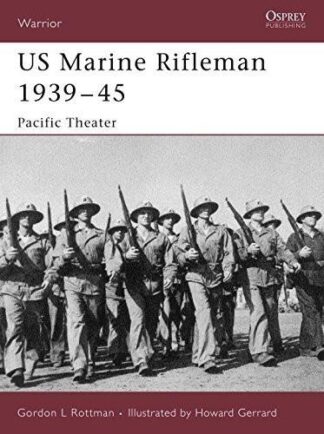