The first WWII mission of Dido was the escort the carrier, Furious to West Africa in November 1940, before spending four months on convoy escort duty in the Atlantic. She then joined operations in the Mediterranean in 1941, assisting in the evacuation of British forces from Crete in May. Badly damaged in these efforts she spent the latter half of that year in the Brooklyn shipyard of New York.

She would return to service in the East Mediterranean, being a key component with only four British ships covering the area. She later served in the Western Mediterranean and supported the Normandy landings in 1944. Her final mission of WWII was to travel to Copenhagen to accept the surrender of the Kriegsmarine. Along the way, she fired the final naval shot of the war in Europe. 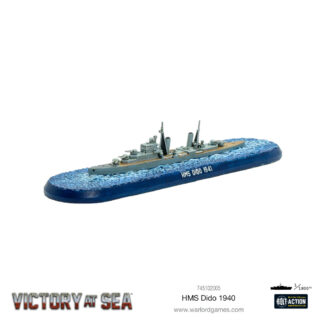