An early aircraft carrier of the Royal Navy, HMS Eagle was originally a super-dreadnought of the Chilean Navy (named Almirante Cochrane), laid down in 1913, but was purchased by the Royal Nav for conversion to a carrier in 1918. This work was not finished until 1924.

Initially deployed in the Indian Ocean against the threat of German commerce raiders, Eagke also saw service in Mediterranean and the China station. At the outset of war, the Fleet Air Arm was severely lacking fighters, so her complement of aircraft was limited to solely Fairey Swordfish Torpedo bombers until late 1940.

Upon the Italian entry into the war on the side of the Axis, HMS Eagle was the only Royal Navy carrier available to the British in the Mediterranean, but performed sterling service in ferrying fighters to the island of Malta. It was whilst performing this latter duty that she was sunk in August 1942, when torpedoed by the German Submarine U-73. 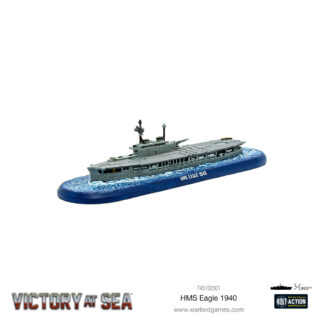