Neptune operated during her World War II service with a crew predominantly composed from the New Zealand Division of the Royal Navy, but also a large proportion of South African personnel. In late 1939 she was in pursuit of the German pocket battleship, Admiral Graf Spee. In the aftermath of the Battle of the River Plate she was sent to Uruguay, however, Graf Spee was scuttled before she could arrive.

She participated in the battle of Calabria in July 1940 against the Italian fleet, suffering damage and losing her floatplane in the process, but inflicting heavy damage to the heavy cruiser Bolzano. Subsequently she participated in operations to disrupt convoys attempting to reach Libya with supplies bound for the efforts of Rommel’s Afrika Korps. She met her end on 18 December 1941, in which Force K wandered into an Italian minefield. A total of four mines were struck, leaving only one survivor, Norman Walton, who spent 15 months as a prisoner of war in Italy. 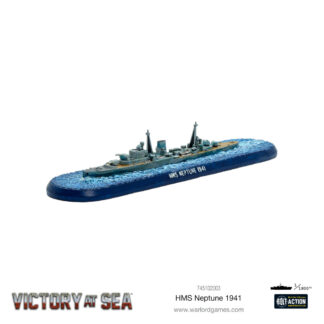 You're viewing: Victory at Sea: HMS Neptune £10.80
Add to basket