Köln was the third of the Königsberg-class of light cruiser, operating between 1929 and 1945, initially under the Reichsmarine and subsequently the Kriegsmarine. In the 1930s she served as a training vessel for cadets, but the outbreak of World War Two saw her conducting operations in the North Sea, though she didn’t encounter any British warships at this time.

She was present at the attack of Bergen during the German invasion of Norway and was the only member of the Königsberg-class to survive the operation (codenamed Weserübung). Later, in 1942, she was experimentally modified to carry a Flettner FI 282 helicopter, and returned to Norway, though she failed to see action. Remaining there until 1945, she eventually returned to Germany only to be sunk in March by American bombers over Wilhelmshaven. However, she remained on an even keel, and with her gun turrets above the waterline, was able to provide fire support to the defenders of the city until war’s end in May 1945. 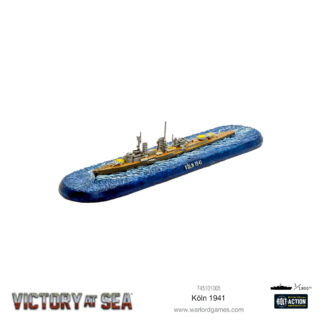