The second of the four Mogami class heavy cruisers, Mikuma was completed in 1935 but quickly underwent refits to replace her main turrets with twin 203 mm guns. Her former weapons, triple 155mm guns went to Yamato. Early in her career she was tasked with the occupation of Cochinchina, the invasion of Malaya and the invasion of British Borneo.

At the Battle of Sundra Strait Mikuma engaged the Allied cruisers USS Houston and HMAS Perth, both of which were sunk. Mikuma then participated in the Indian Ocean Raids, before being recalled for the Midway operation. It was here she met her demise; on 5 June 1944, she was badly damaged by a friendly ship collision attempting to evade US submarine torpedo attacks. A succession of attempted airborne attacks, from B-17s to Vought SB2U Vindicators all failed. The next morning, however, SBD Dauntless dive bombers from USS Enterprise and Hornet managed to successfully inflict 5 bomb hits resulting in a cataclysmic chain reaction of explosions of the onboard AA shells and torpedoes. 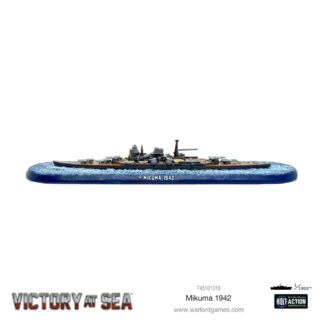