The third of the Admiral-Hipper-class of heavy cruisers, Prinz Eugen was named for Prince Eugene of Savoy, and 18th century Austrian general. She saw action during the German operation Rheinübung of 1941, in which, along with Bismarck, she attempted to breakout into the Atlantic to sow chaos amongst merchant convoys. The two ships destroyed the British cruiser Hood and damaged HMS Prince of Wales in the Battle of Denmark Strait. Shortly after, Prinz Eugen put into France to enact repairs following engine difficulties.

Briefly deploying to Norway, she was put out of action for repairs in Germany after being struck by a torpedo from a submarine. In the latter stages of the war, she served as artillery support for the retreating German army from the Baltic Sea. In May 1945 she was surrendered to the US Navy as a war prize, and was subjected to the nuclear tests of Operation Crossroads. Despite surviving the atomic blasts, she capsized after being towed to Kwajelein Atoll in December 1946. The wreck remains partially visible to this day. 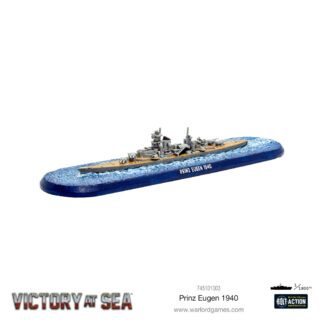 You're viewing: Victory at Sea: Prinz Eugen £10.80
Add to basket