The German capital ship Scharnhorst was the lead of her two ship class, launching in October 1936. She was armed with a main battery of nine 28cm C/34 guns in three triple turrets. Though plans were drawn up to 38cm guns, these plans were never enacted.

Throught the early war, Scharnhorst, operated in tandem with her sister ship, Gneisenau, in raiding British merchant shipping in the Atlantic. An early victory was the sinking of HMS Rawalpindiin November 1939. She subsequently participated in the invasion of Norway and sank HMS Renown, a battlecruiser, and HMS Glorious, an aircraft carrier, as well as their escort destroyers – in the course of these battle achieving one of the longest range gunfire-hits in military naval history.

In early 1943, the Scharnhorst joined the Tirpitz in Norway, hoping to interdict Allied convoys to the Soviet Union, but were intercepted by Royal Navy patrols. During the Battle of the North Cape, Scharnhorst was sunk by HMS Duke of York and her escorts. 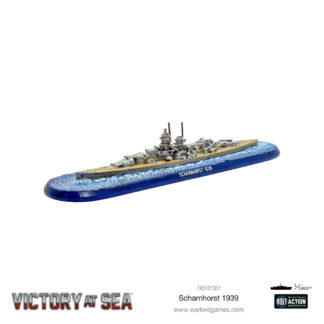 You're viewing: Victory at Sea: Scharnhorst £13.50
Add to basket