Originally conceived as a light cruiser, USS Houston (second of her name) was reclassified as a heavy cruiser early in her life, serving in the 1930s to protect American interest in the China-Japan war of 1931 and later transporting President Roosevelt on special ‘cruises’.

On the night of the Pearl Harbour attack, Houston departed Panay Island for Australia joining the American-British-Dutch-Australian naval force at Surabaya. She participated in the Battle of Makassar Strait, shooting don four Japanese aircraft. Thereafter she was part of the Timor Convoy, shooting down 7 out of 44 aircraft in the second of two attacks. As a result, she was absent from the attack on Darwin of 19 February 1942. Her next major action was at the Battle of the Java Sea, the largest surface engagement since the Battle of Jutland in World War One. 5 cruisers and 10 destroyers of the Allies met a Japanese force of 4 cruisers and 13 destroyers on 27 February 1942. The ABDA naval force lost 2 cruisers and 3 destroyers.

It was the at the Battle of Sundra Strait that Houston would meet her eventual fate, in which she and HMAS Perth were sunk by torpedoes from a destroyer squadron. The route had been thought free of enemy vessels, but this proved false with the two ships surrounded by multiple Japanese Warships. The story of her demise was not known fully until the liberation of the 368 survivors of Houston, from Japanese prison camps at the close of war. 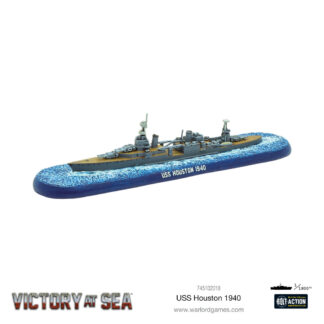 You're viewing: Victory at Sea: USS Houston £10.80
Add to basket