USS New Mexico (BB-40) was the lead of her class of battleship and served with the United States Navy between 1918 and 1946. She was the first ship with a turbo-electric transmission, capable of a cruising speed of 10 knots. She served as an escort to President Woodrow Wilson’s voyage to Brest, France, for the signing of the Treaty of Versailles. She operated repeated exercises in Pacific and Atlantic waters in the interwar period and received major modernisation between 1931 and 1933.

Initially, in World War II, the vessel was involved in neutrality operations in the Atlantic. This soon changed after the attack on Peral Harbor. She returned to the Atlantic and participated in shore bombardments including at Attu and Kiska, Tarawa, the Marshall Islands, the Mariana and Palau Islands Leyte, Luzon and Okinawa. She also performed escort duties, patrols and received refits during this period. USS New Mexico was subject to repeated kamikaze attacks during her WW2 service, which inflicted heavy damage and loss of life. However, she persevered and was present in Tokyo Bay for the Japanese surrender that officially ended the war. 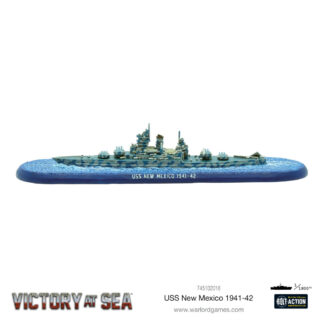